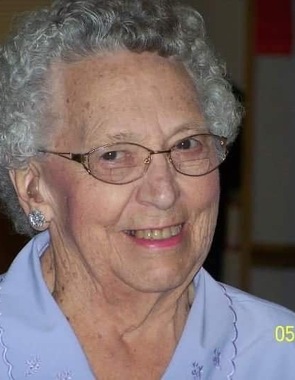 Back to Cassie's story

Cassie M. Haines, age 96, longtime Denmark Twp. resident and residing in Jefferson the past few years, died early Saturday morning at Saybrook Landing.
She was born May 16, 1923 in Denmark Center, the daughter of Perry & Genevra (Whipple) Paulson and has been a resident of the Jefferson area all of her life. She was a graduate of Jefferson High School. She was married to Robert A. Haines on June 16, 1945 in Denmark Center. Cassie worked as a bookkeeper for the Ashtabula Co. Farm Bureau Co-op in her younger years and was bookkeeper for Haines Memorials and the Haines Brother's Dairy Farm.
She was a member of the Dorset United Methodist Church and a former member of the Denmark Grange and Relief Chapter OES #546 in Pierpont, now Orion Chapter OES #12 in Kingsville. Cassie enjoyed sewing, crafts, gardening, flowers, reading and being with the children and grandchildren.
Survivors include three children, Linda M. Estill of Lansing, MI, Roger P. (Ruth) Haines of Dorset Twp. & Lauri M. (Scott) Allen of Jefferson; six grandchildren; 10 great-grandchildren and three step-great-grandchildren.
She was preceded in death by her parents; her husband Robert in 2006, a granddaughter; a great-grandson in the womb; brother, Clark Paulson; sisters, Mary Paulson & Ruby Artman and nephews, Kenneth Artman & Jerry Paulson.
Funeral services will be Wednesday at 12:00 PM at the Jefferson Home of Fleming & Billman Funeral Directors and Crematory, 49 W. Jefferson St., Jefferson with Pastor Douglas Winner of the Jefferson United Methodist Church and former pastor, Elaine Turner officiating. Burial will be in S. Denmark Cemetery.
Visitation will be held Wednesday from 11:00AM until noon at the funeral home. In lieu of flowers, the family suggests memorial contributions to the Manna Food Pantry, 89 E. Satin St., Jefferson, OH 44047. The Fleming & Billman Funeral Homes and staff are honored to serve the Cassie Haines family. To express condolences, view obituary or light a candle visit fleming-billman.com.
Published on January 25, 2020
To send flowers to the family of Cassie M. Haines, please visit Tribute Store.

Send flowers
in memory of Cassie

A place to share condolences and memories.
The guestbook expires on April 24, 2020.

Jennifer Christine
Sorry for ur loss.. I sure enjoyed caring for her the last few months
Kent Yeager
Laurie and family,
Please accept condolences from the entire Yeager family. We remember your mother and father well. Good people.
The Rudler families and Powers
Our extended family from even almost 70 yrs ago have done business with The Haines Memorials and most recently
View all