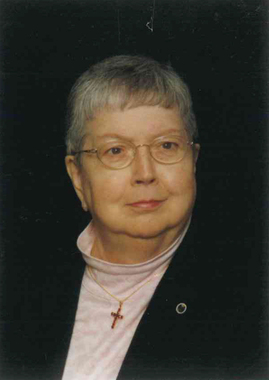 Back to Frances's story

Frances Mabel Apltauer, 80, of Cleveland, passed away at Austinburg Nursing and Rehab home on December 5, 2019. She was born in Ashtabula on March 23, 1939 to John and Mabel Apltauer of Eagleville, Ohio.
Fran was the youngest of six children. She graduated from Austinburg High School in 1957 and attended Kent State University. She moved to Cleveland and worked at Metrohealth Hospital for 31 years, She then worked at the United Church of Christ National Offices in Cleveland for 10 years. She became a lay pastor and was a guest pastor for many area churches.
She is survived by one sister, Peggy (Richard) La Du of Ashtabula. Preceding her in death were her parents and brother John (Margaret) Apltauer, Jr., of Cleveland, Ohio, also sisters Audrey (Joe) Rufo, Florence (Richard) Stoner, Dorothy (Fred) Landig, and many nieces and nephews.
Memorial services will be held on January 11, 2020, at Noon, at Christ United Church, 23114 West Rd., Olmsted Falls, Ohio. Friends are welcome from 11:00 to 12:00 at the church.
Burial will be at the Eagleville Cemetery at a later date.
Published on December 10, 2019
To plant a tree in memory of Frances Mabel Apltauer, please visit Tribute Store.

Plant a tree in memory
of Frances

A place to share condolences and memories.
The guestbook expires on March 09, 2020.

Cathie Noga
Please accept my sincere sympathy. I was unable to attend the services due to a family commitment. I have known Fran for nearly 50 years as I worked at Metro in research for the Burn Unit. Her close friend Carol Bilski and I worked together. Actually I was hoping to see her at the burn survivors annual holiday party on December 7 , not aware that she had passed away. She was wonderful woman who will be greatly missed. Peace...
Hanka, Mike & Marek

A memorial tree was planted in memory of Frances Mabel Apltauer.  Plant a tree

Angela Marra
I am so very sorry for your loss. Fran was a wonderful and true friend of mine. Her loss has hit me to my core. I will miss our time spent catching up over breakfast and learning of her love for her Pastoral work. She had a huge and trusting heart. I know and completely believe that she went straight into heaven. There are few people (that I know of) who is as beautiful a person that she was. I will miss her forever! Rest In Peace my friend and May you be basking in God’s loving graces.
Bob Walton
My dad was Mabel's cousin. I met her and her family in the early '79's on a trip from Ottawa to Cleveland. In early November of this year a letter was given to me by the owner of a home we sold ten years ago. It was from Mabel asking me how my dad was doing. As it turned out, he had just passed away on the 22nd of October, and I had tried to email and left phone messages to let her know, but never heard back. Very unfortunate that she has passed away now, too. Rest in peace, Mabel.
Sue Pray
Fran was a huge inspiration and support for me both in my teenage years when she was my youth advisor, but also when we later reconnected and she encouraged me to pursue ministry. She will be missed. She was such a blessing.
View all