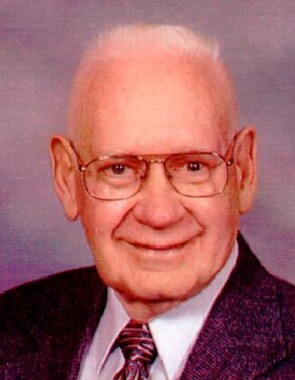 Back to Grant's story

Grant (Gene) E. Johnson, age 92, a long-time resident of Ashtabula, passed away on November 27, Akron General Medical Center. He was born March 25, 1927, in Wooster, Ohio. He was the son of Dean L. and Edna G. Johnson.
Mr. Johnson grew up in Titusville, Pa. He graduated from Titusville High School (Colstock Class of 1945). He is a veteran of the U.S. Army, World War II. He graduated from Bucknell University, and attended graduate courses at the University of Pittsburgh, Ohio University, and Case Western Reserve University.
He worked for 26 years at Reliance Electric at a motor design engineer, retiring in 1982. He was an instructor at Kent State University, Ashtabula Campus, teaching electrical and computer technology for six years. Also, he was a long-time Mason, advancing to the commandery degrees. He was active in First United Methodist Church, serving on Finance and Trustees Committees.
He was also an avid computer and electronics hobbyist.
His wife of more than 60 years, Shirley Kerr Johnson, preceded him death in 2016.
He is survived by two sons, Kirk W. (Cindy), of Center City, Mn., Keith E. (Julia) of Galena, Oh.; and a daughter, Kathy A. (John) Kerezy, of Cuyahoga Falls, Oh.; eight grandchildren; and three great grandchildren.
Calling hours will be at First United Methodist Church, 4506 Elm Ave. Ashtabula. on Saturday, December 14, beginning at 10 a.m. The memorial service will also be at First United Methodist Church, beginning at 11 am with Rev. Preston Watkins officiating.
Burial will be in Edgewood Cemetery.
Memorial contributions may be made to the First United Methodist Church, Ashtabula.
The Ashtabula Home of Fleming & Billman Funeral Directors and Crematory, 526 W. Prospect Rd is honored to serve the Grant Johnson family. Guestbook, light a candle and obituary at www.fleming-billman.com.
Published on December 9, 2019
To plant a tree in memory of Grant E. Johnson, please visit Tribute Store.

Plant a tree in memory
of Grant

A place to share condolences and memories.
The guestbook expires on March 08, 2020.