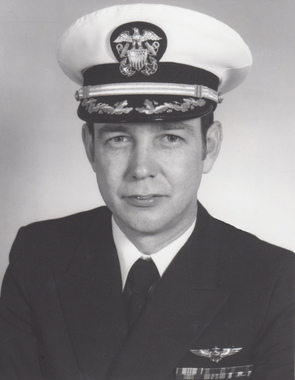 Back to Hollis's story

Hollis Harmon, age 77, of Chantilly, Virginia died December 22, 2019, in Aldie, Virginia. He was born to the late Glenn and Dorothy Harmon, in Conneaut, Ohio on 28 May, 1942.
Hollis was a 1960 graduate of Edgewood High School. In 1965 he received a BS in Education from The Ohio State University and was also commissioned an Ensign in the US Navy. In that same year he married his wife, Carolyn, whom he had met at OSU.
He is survived by his beloved wife, Carolyn; two sons, Eric (Corin) Harmon of Chantilly, VA and Nathan (Evelyn) Harmon of Ooltewah, TN; three granddaughters, Makayla, Leanna, and Addison; and brother, David (Adela) Harmon of Andover, Ohio.
He retired from the Navy with the rank of Commander in 1991. He was proud to serve on the USS Intrepid as a naval aviator, the USS Hancock as the flight deck officer, and the USS John F Kennedy as the intelligence officer. A tour of duty in Hawaii as Technical Intelligence Officer for the Pacific Fleet convinced him to switch from flying to intelligence. He was then stationed primarily in the Washington, DC area, but with many trips and duties around the world. Upon retirement from the Navy he continued the same line of work until his retirement in 2013. He enjoyed gardening, reading, taking nature walks, being a computer geek, and the company of his dear granddaughter, Addison.
Grave side service at Arlington National Cemetery will be scheduled at a later date. Final arrangements made by Direct Cremation Services of Virginia. Contributions may be made in his honor to the American Cancer Society.
Published on January 8, 2020
To plant a tree in memory of Hollis W. Harmon, please visit Tribute Store.

Plant a tree in memory
of Hollis

A place to share condolences and memories.
The guestbook expires on April 07, 2020.

Bill Hewitt
Often thought about the days when all of us boys from N. Kingsville who were born in May 1942 playing in the barn or riding the horses. Rest in peace
View all