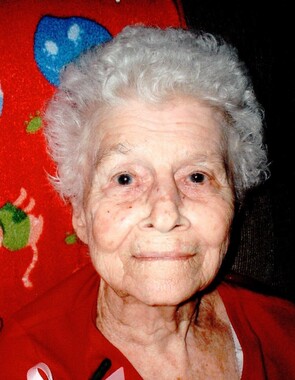 Back to Irene's story

Irene H. Doll, 97 of Ashtabula, died Saturday, Jan. 11, at the Country Club Retirement Campus in Ashtabula. She was born March 19, 1922, in Brownhill, Pennsylvania, the daughter of Peter and Mary (Vasko) Galambus.
She had worked for over twenty years at Forsyth Store in Ashtabula. Following her and her husband's retirement they moved to Interlachen, Florida where the lived for over twenty years. After her husband's death she moved back to Ashtabula and lived with her daughter Barbara.
She enjoyed watching sports, playing bingo and quilting.
Surviving her is her daughter, Barbara I. (Al) Snitcher of Ashtabula; three granddaughters, Pam (Al) Peck, Debbie (Brian) McEndree and Jill Snitcher McQuain; one sister, Verna Reiman of New York; six great grandchildren, Andrew Wheeler, Chelsea Wheeler, Zachary McEndree, Brianna McEndree, Ryan McQuain, and Logan McQuain; two great - great grandchildren, Essie McEndree and Marley McEndree.
She was preceded in death by her parents; her husband Cecil Doll in 1990; a son, Joe Doll; six sisters, Julia, Mary, Bertha, Margaret, Elizabeth, Magdeline; and two brothers, Pete and Frank Galambus.
At Irene's request no services will be held.
The Ashtabula Home of Fleming & Billman Funeral Directors and Crematory, 526 W. Prospect Rd. Ashtabula is honored to serve the Irene Doll family. Guest book, light a candle and obituary at www.fleming-billman.com.
Published on January 13, 2020
To send flowers to the family of Irene H. Doll, please visit Tribute Store.

Send flowers
in memory of Irene

Blanche Callen
So very sorry to learn of my Aunt Irene’s passing she will be missed dearly by her family but I know she’s happy with Uncle Cecil my deepest sympathy to Barb and Dick and all the grandchildren and great grandchildren
JoAnn Fratis Gabriel
I am so sorry for the loss of Irene..My "Miss America". She was one of my favorite ladies. She will always have a special place in my heart! Love and prayers to all of her family.
Jennifer Hines

So very sorry for your loss. Thoughts and prayers are with you all during this difficult time.

Nichole Allen
Irene was the best fighter I knew. She was a comedian at best. You would ask her how old she was and she woukd say "im 17, well thats what i tell everyone shhhhh but im really not" her other favorite story was her husband was a "pitcher" for the Browns. She would always ask, " do you know what I am" id say what ireney and she would say Im a honkey. She was an amazing woman and one of my favorite Golden Girls. I will forever hold her in my heart. So sorry to the family for their loss. I love you all!!
Debbie McEndree
I love you so much, Grandma. I will miss you dearly every day.
View all