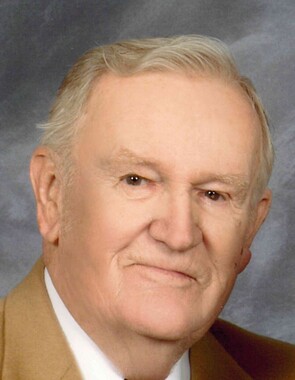 Back to James's story

Orwell - James W. Jones, age 93, passed away on Sunday, January 12, 2020 at his home. He was born on August 23, 1926 in Greenville, PA the son of Lloyd and Grace (Gillis) Jones. James Graduated from Orwell High School in 1944 and served in the United States Army Air Corps during WW II. After his honorable discharge he attended Baldwin Wallace College receiving a BA Degree in 1951. After graduating from college he married Rosemary (Deimling) Jones on October 20, 1956. He worked for Jones Motor Sales until 1963, The Insurance Company of North America from 1963 to 1983. He was also the mayor of The Village of Orwell for 12 years, President of Village Council for 18 years. Some of James other positions and membership held were: He organized Orwell's First Police Department in 1953 and was the first Police Chief for 5 years, member of the Orwell Vol. Fire Department for 20 years, Highway Patrol Auxiliary, Orwell Chamber of Commerce Membership Chairman 8yrs, Grand Valley Development Corporation and Board of Public Affairs. He was also a member of Triandria Masonic Lodge, Scottish Rite of the Valley of Youngstown and Al Loran Shrine of Cleveland, Life Member of American Legion Post 719, Charter Member 40/8, originator of the Avenue of Flags, Old Brick Historical Society Trustee and Local Historian, Boy Scout Leader Troop 72 and Orwell Gun Club member. Jim was also a member of the Orwell North Presbyterian Church since 1940 where he was a Trustee, Sunday School Superintendent/Teacher, and sang in the choir and played in the orchestra. In 2014 James received the Lifetime Achievement Award from Ashtabula Co. Growth Partnership. Some of James hobbies were the Model "A" Club and he completed a full restoration of a 1931 Model "A" Woody Wagon in 2001. In addition to collecting Trench Art, sporting prints, tire ash trays, collecting Orwell Memorabilia. He was also sportsman who enjoyed hunting and fishing. He is survived by his wife Rosemary Jones, sons James L. (Darlene) Jones and Thomas R. (Donna) Jones, grandchildren Nicole R. (Eric) Lowenkamp, Thomas J. (Jeannine) Jones and Niki Jones, Great Grandchildren Jillian and Zoey Jones. Preceded in death by his parents Lloyd and Grace Jones, daughter Cynthia Jones and brother Lloyd Jones Jr.
A funeral service officiated by Pastor Kevin Horrigan will be held at the Orwell North Presbyterian Church, 135 N. Maple Street, Orwell, OH 44076 on Friday, January 17, 2020 at 10:00 a.m., with US Army Military honors and burial to follow at Orwell North Cemetery. Visitation will take place at the Paine Funeral Home, Inc. 140 E. Main Street, Orwell, OH 44076 on Thursday, January 16, 2020 from 4:00 p.m. - 7:00 p.m. At 7:00 p.m. a Masonic Lodge and American Legion Service will be conducted. The family would prefer that Memorial Contribution be made to the Orwell North Presbyterian Church or American Legion Post 719. Condolences may be made at painefuneralhome.com
Published on January 13, 2020
To send flowers to the family of James W. Jones, please visit Tribute Store.

Send flowers
in memory of James

Joe Hudak Jr.
Jim was the first boss I ever had, and a great one! Jones Motors 1961.
Don Gill
“Jimmie” will be sorely missed by all who knew him! He surely was a man of many talents and interests. My sincere condolences to his Family from Fl. Sorry I can’t deliver in person.
Tribute Store

David Eardley
Jim always had a project he was working on or planning. When I would see his projects I would think they are bigger then I would take on but he always saw them through and they turned out great. From seeing his Model A in parts covering 2 garage stalls to the Stone house. He knew ahead how they would turn out. I will miss him and always wish I had spent more time with him.
Shari
Rest in peace Uncle Jim.
Carl F. Muller
As a young lawyer I had the pleasure of working with Jim when he was with INA. Jim was a real professional and his record of community service is truly remarkable.
Anne Yeager
Jim was a true champion for Orwell Village. The entire community benefited from his dedication and diligence to bring new business and growth. He was instrumental in bringing natural gas to our community. I for one, would not be where I am today if it were not for him. He was one of the best.
Tom
I’ll miss you Dad and I will strive to live up to your incredible legacy.
View all